Our latest guest blog post is by Charlotte Slater. Charlotte was brought up and schooled in Orkney before heading to the mainland to study a BA (Hons) Landscape Architecture at Edinburgh College of Art. Having a keen interest in the marine environment, she transferred the skills and knowledge gained at university and became a Marine Spatial Planning Officer, based at the NAFC Marine Centre, Shetland.

The Shetland Coastal Character Assessment began in 2014 as ongoing work of the Shetland Islands’ Marine Spatial Plan. Survey work was completed in 2016 and the final edition is due to be published this summer (2017). A coastal character assessment is a method of assessment similar to the landscape character assessments that were done across the UK in the 1990s and early 2000s. The purpose is to look at the variety of components which make up the coast, including the geology, industrial uses, character types, aesthetics and the historical elements so as to obtain a comprehensive overview. The document can be used by planners and developers to get a more in depth view of a given area.

When I saw the call for the ‘Firths and Fjords’ conference, I was immediately interested. I have always enjoyed history and having lived on islands, Orkney and now Shetland, for most of my life, coastal history is embedded in daily life. Although I had this personal interest in the subject area, I had also been awarded a small grant from the Carnegie Trust at the end of 2014 to create a number of art pieces that could be used to engage the public in the coastal character assessment project. So the art exhibition that was running alongside the conference fitted perfectly. The main piece I brought was a 3D contour map at 1:50,000 scale of the Shetland Islands which stands at over two metres tall and instantly grabs people’s attention. I got some great responses from folk at the conference and many were interested in the ongoing work of the coastal character assessment as well. 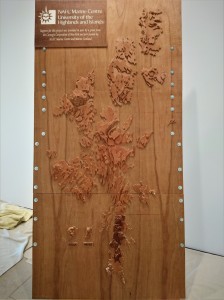 I really enjoyed taking part in the conference. I found the papers, including John Gillis’s keynote speech in Dornoch Cathedral, gave me much to reflect on in my own research. Joanna Hambly’s paper on the Zulu fleet found in Findhorn Bay was also interesting, showing that there is much about the coast that is hidden right beneath our noses. Over the course of the conference, I began to consider the possibility that coastal history could have far more significance within marine spatial planning than it currently does.

There was a real sense of community throughout the conference, with local interest groups and businesses taking part in the exhibition, the local school serving lunches and selling their products to raise money and members of the public attending too. It was great to see such a positive reaction from the community, driving home that public engagement is so important, which was also reflected in a number of the papers presented involving research conducted using volunteers. Overall, I think it increased the whole success of the conference and was a great example for other events of how a local input can enhance the whole experience.

The ‘Firth and Fjords’ conference has inspired me to consider coastal history more in my own research. Although I am part of the marine spatial planning team at NAFC Marine Centre, the maritime heritage of Shetland has greatly influenced the islands today and looking back, I believe, can really help understand and plan for the future, which is a large component for marine spatial planning. I have also begun an Island Studies masters since attending the conference. Considering the past of the islands I have looked at has become an important part of understanding the cultural, economic and environmental impacts of the islands today. 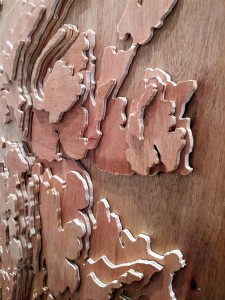 Since taking part in the conference, the exhibition pieces have been on show in Shetland and at the Pier Arts Centre in Orkney, with a couple of new items added which look at the Shetland dialect in relation to the sea and land. There is also a funding bid which has been submitted, to carry out a small maritime heritage project on a number of the outer islands in Shetland over the next year which, if successful, will be an exciting opportunity for learning more about Shetland’s past. By considering past uses of the coast around Shetland, it will be easier to see the influences this has had on the islands’ culture and industries that are prominent today and which feed into the next marine plan for Shetland.

I would like to take this opportunity to thank the Centre for History for allowing me to take part in such a fantastic conference and for inspiring my continued research, offering me a new perspective to consider in relation to marine spatial planning.

One thought on “Assessing Coastal Character and Planning Marine Spaces”